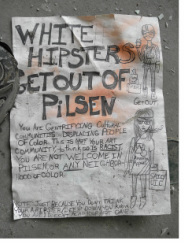 Today, Pilsen remains a Mexican working class community. In 1996, Pilsen saw an increase of white residents. According to the 2000 Census data, there were 39,144 Hispanics living in Pilsen (they occupied 89% of the population in Pilsen) and there were  17,273 Non-Hispanic whites living in Pilsen (they occupied 9% of the total population in Pilsen.) Then according to the 2010 Census data the Hispanic population decreased to 82% of the total population and the white population slightly increased over 9% . Along with the increase of white residents in the neighborhood; Pilsen saw an increase in housing prices and rents. Nearly half of Pilsen’s properties have seen a 25%-49% rise in value and some properties have seen a remarkable 125% increase in value. Property taxes are expected to increase up to $165 dollars. (stean.depual.edu) It is predicted that in a decade the population of Whites will be more significant than the population of Hispanics. Chicago tribune reports that Pilsen along with Wicker Park and Halsted Street North are the neighborhoods that have undergone the most gentrification in the Nation. (networx.com)

The Effects of Gentrification in Pilsen

As the population of middle class / wealthy residents increases; the housing prices and property taxes increase as well. As a result, many Hispanic working class residents are unable to afford the increasing property values.  One resident claims that many historic building are being replaced with upscale condominiums. This also means that Pilsen will lose its prideful Hispanic identity. The resident also claims, “With buildings, culture and language at risk of disappearing in favor of higher housing prices part of Chicago’s multicultural identity will be erased.” Mexican non-basic businesses will then close down because of the increasing rents. The owner of Fogata village proclaims the importance of Pilsen to the Latino community, “Pilsen is very important, it has culture, it has art.” The owner employs Hispanic residents of Pilsen. The business provides employment for the Latino community  “and contributes” to the economy of the community for Latinos. Gentrification will damage and foreclose the small businesses and homes in Pilsen ,that has in the past ,strengthened the Hispanic community. Chicago has seen an increase in gentrification in communities and districts that surround the CBD (downtown). In certain businesses, the threshold increases because property values increases (now there are more people needed to support that business, and it is harder to make a profit). According to the bid and rent theory, it cost more to invest, buy a home or rent a building if it is close to the CBD as oppose to a house farther away from the CBD. Pilsen is located west of the loop, it is also situated 10-15 minutes away from the CBD and the University of Chicago at Illinois. Therefore, in the future it will cost more to live and create business. As a result the population of Mexicans will decrease.